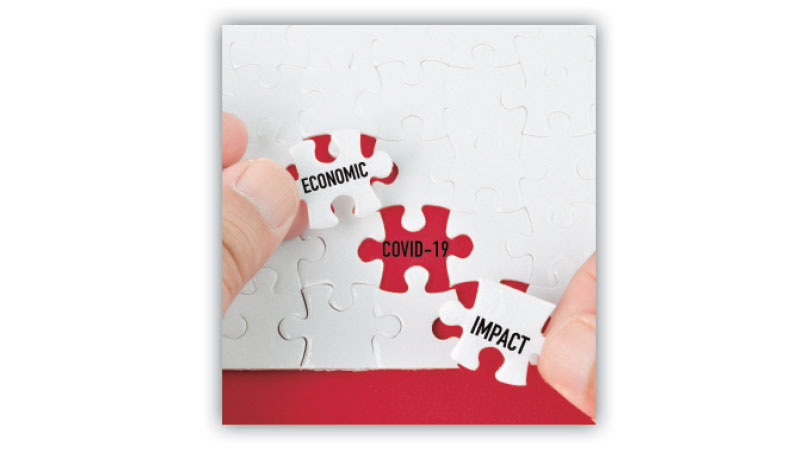 The reason is simple: trade and tourism are great vehicles for pandemics. According to the 2020 UNCTAD Review of Maritime Transport, it will have a lasting effect on trade patterns and supply chains. The United Nations Conference on Trade and Development (UNCTAD) noted that the Caribbean economy was hit hard, given its dependence on overseas tourism and container trade, both heavily disrupted by the crisis. Having documented the human and economic impacts in the two previous editions, Portside Caribbean identifies lasting impacts and long-term implications of the COVID-19 pandemic.

Record volumes of freight transiting the Panama Canal; 24/7 port operations in congested ports in the east-west trades, ships at anchor waiting to get off-loaded, soaring freight and charter rates, rising energy prices and labour shortages made it clear that the market had not yet found new equilibrium following the disruption of demand and supply cycles during the pandemic.

These cycles fluctuated too much and too fast for the supply chain to keep pace. Rates for charter vessels and container freights soared, filling the pockets of the shipping lines. In the 12 months to the time of writing, cash-rich ship owners doubled their new-build orders for 2023 and 2024.

How will all this affect the Caribbean?

How do the stakeholders see the future, and how are they preparing for the post-pandemic trading system?

Congestion
The traffic jam described earlier is rooted in the demand shift away from services to household consumer goods during the pandemic. People stopped taking vacations and going to restaurants, bars, concerts and large events. Finances previously spent on entertainment and leisure went instead towards refurbishing the house, getting office equipment in order to work at home, and investing in health-related goods like bikes, gym equipment and lawnmowers.

These goods started moving to consumer markets in the USA and the European Union during a time when many ports, trucking companies and rail operators were in lockdown, or had problems finding qualified labour to move goods and containers out of the ports. As the ports and warehouses filled up, vessels had to wait outside for offloading, and containers and goods had to move outside of the ports somehow. This led to congestion, particularly in the US west coast ports because of specific factors in the US trans-modal transportation system.

“Ports are a symptom of the congestion issues, but not the cause,” said Chris Connor, President and CEO of the American Association of Port Authorities (AAPA).

Constraints across the entire freight mobility network have resulted in freight stagnating at port complexes. Connor emphasized that the US port system has lacked the necessary federal funding to modernize port infrastructure and freight connectivity between modes.

“The bill passed by Congress on November 5 is a great start towards modernization, but it will take some time before the impacts of the spending will be realized,” he said, adding that AAPA ports are handling significantly more cargo now than before the pandemic, and are stepping up to get the congestion issues resolved.

Order books
BIMCO1 recently announced that an additional 381 container vessels were ordered in the past 12 months, with the current order book logging 619 vessels. Most were planned for delivery in 2023 and 2024 although, given market circumstances, there could be delays.

Presently, the most popular container vessel size is in the 13,000-16,000 TEU range. It is more adaptable than the Ultra Large Container (ULC) ships and can serve both the main trade lanes as well as the emerging markets and trading routes.

The cruise ship order book shows more than 100 vessels scheduled for delivery between 2021 and 2027. Twenty-one of these will be LNG fuelled. The others were to be fitted with scrubbers. And most (75%) will require shore power connections. Here too, bigger is no longer better. Only 10% of the cruise ships on order were over 200,000 GT in size.

Cruise Lines International Association (CLIA) was confident in stating that demand has returned. It was sticking to its pre-pandemic ‘40% less carbon emission by 2030’ policy, through a combination of more clean fuel vessels, shorter itineraries with slower sailing speeds, reduced fuel consumption, and scrubbers on the traditional fleet to reduce carbon emissions.

Energy
The hike in energy prices and returned demand for traditional fossil fuels influence the markets, the global trade system and its regulators. The IMO set clear goals for 2030, but these may not be enough to reach the global objective of less than 2% increase in global temperatures.

Additional efforts are necessary. The International Council of Shipowners (ICS) recently proposed a system of taxation for fossil fuels and sulphur emissions. The direction this issue will take is yet unclear. So far, shipowners and, consequently, ports and suppliers are taking a wait-and-see approach.

LNG is gaining ground and the number of ‘shore power vessels’ is growing. Global shipbroker Clarkson2 has predicted that the LNG-fuelled fleet will double in size before 2025, but as the AAPA President observed, the LNG fleet is still a small percentage of the total fleet worldwide.

“The ports, therefore, will understandably have to take somewhat of a wait-and-see approach,” said Connor. “Clarity needs to come from federal governments, the IMO, and from the energy economy. Still, many AAPA ports are ready and investing in both LNG-bunkering services, and in shore power facilities.”

President of Gulf Ports Association of the Americas (GPAA), Amy Miller, also weighed in on the matter.

“The Gulf ports are ready to receive the new generation of container and cruise ships, both in their infrastructure and bunker fuel requirements,” she said.

GPAA membership includes seven international container ports and four cruise ports, servicing fleets that also operate in the Caribbean. These ports have LNG bunker facilities in place, or they are investing in them. Many offer shore power connections to assist in the lowering of fuel consumption and gas emissions.

In the Caribbean, initiatives for LNG use are underway. However, concerns have been expressed about over-investments. The cruise business – the main market for both LNG and shore power – is seasonal, and, as ports compete for seasonal business, the danger of overcapacity and under-pricing increases.

Darwin Telemaque, Chairman of the Port Management Association of the Caribbean (PMAC) and CEO of the Antigua and Barbuda Port Authority, said that several cruise destinations were investing in LNG capacity, including Panama, Jamaica, St. Maarten, Barbados and Antigua.

Antigua is preparing to invest US$100 million in a local LNG grid, with 20% potentially available for bunkering services in the port.

Regional coordination was necessary to avoid overinvestments and lower returns, he said.

Head of Corporate Communications of Curacao-based bunker provider, Curoil, Jessica Flockers felt that the implementation of regulations remains an issue in the Caribbean, but that pressure is increasing as the shipping industry adjusts to the demands of the world trade system.

“Scrubbers are now the norm, but critics point out that these are curbing the demand for LNG and clean fuels. This is a dynamic process and Curoil is investing in research and development for alternative fuels with local stakeholders, including the port authority. These studies are now in a preliminary phase,” she said.

Port labour
The supply chain may push for further digitalisation and automation to lower labour costs and risks. Massive investments in human resources will be required to manage and control such digitalised environments. Governments and ports will need to take a long-term view and plan for such investments and developments. The question is how will all of this play out in the Caribbean port and trading network?

Telemaque believes that for most member ports in the Organization of Eastern Caribbean States (OECS), inflexible port regulations and a lack of local competition and efficiency were longstanding issues in the container trade to those countries.

“The lines are frustrated by the lack of adaptation in the regional port system. And in the end, it is the OECS consumer paying for the inefficiencies and lack of local service,” he said.

Consolidation has been the answer from the lines. But this can do relatively little to keep prices and delivery schedules acceptable. The number of lines servicing OECS ports has steadily declined in the last 50 years from over 15 then to only four or five now. Telemaque feels that concerted OECS action is necessary in order to implement an action programme to be more efficient in servicing local consumers. Cooperation also avoids overinvestment in container and bunker facilities as well as infrastructure.

“Resistance to change has to be addressed at the CARICOM level and at the grass-roots level of the local unions and port constituencies. The OECS can assist in defining and monitoring any coordinated regional programme for change,” the PMAC Chairman said.

Port investments
The debt position of Caribbean governments worsened considerably during the pandemic. This limited governments’ ability to make any major port investments. Alternative structures for financing port development include private ownership or private port operation, through Public Private Partnerships (PPPs). However, there are challenges, as indicated by senior staff of the Economic Infrastructure Division of the Caribbean Development Bank (CDB).

Many member countries have not established the institutional and regulatory framework for effective PPPs in seaport operations. Most reportedly do not have clear rules for private investments in public infrastructure, and have limited technical capacity to structure and successfully tender such mechanisms in the market. CDB, in response, is restructuring its PPP function to better assist its member states.

Observations
In reviewing the impact of the COVID-19 pandemic on the Caribbean port system, what has become clear over the past few months is the cost in terms of human suffering and economic disruption. The winners are those that survived and can adapt to a different post-pandemic world trade system. This system requires a more resilient supply chain, where production and labour, as well as transportation and distribution, are better integrated and the entire process is more centrally controlled and coordinated. Consolidation and integration of transport modes is the likely consequence of this requirement.

The Caribbean port system has survived the pandemic, however, the island economies were hard hit and the ability of the ports to adjust to a new post-pandemic reality depends also on the political will to change age-old systems and attract private investments in port operations and port services, like LNG and shore power services. For such investments to be successful, an effective institutional framework for public-private partnerships needs to be set up in most Caribbean countries. Regional institutions, including Caribbean Development Bank, are available to assist countries in this process.  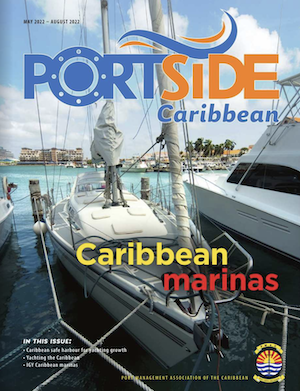